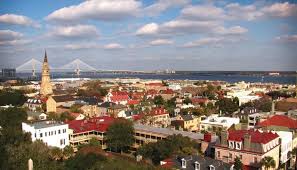 The Charleston-North Charleston, SC Metropolitan Area is a three-county area in Southeastern South Carolina anchored by the city of Charleston.

The city is located on Charleston Harbor, an inlet of the Atlantic Ocean formed by the confluence of the Ashley and Cooper rivers, or, as is locally expressed, "where the Cooper and Ashley Rivers come together to form the Atlantic Ocean".

The area is known for its rich history dating to the 1600's, well-preserved architecture, a celebrated restaurant community, mannerly people, and beautiful beaches. It has been named "America's Most Friendly [City]" by Travel + Leisure, the #1 City in the US by Condé Nast Traveler, and also "the most polite and hospitable city in America" by Southern Living magazine.

Charleston is a growing and dynamic place to live that thrives on tourism, federal military installations, and a increasingly diverse economic base.

Charleston is famous for its unique culture, which blends traditional Southern U.S., English, French, and West African elements. The downtown peninsula is well known for its art, music, local cuisine, and fashion.

Charleston is also known for its local seafood, which plays a key role in the city's renowned cuisine, comprising staple dishes such as gumbo, she-crab soup, fried oysters, Lowcountry boil, deviled crab cakes, red rice, and shrimp and grits. The cuisine in Charleston is also strongly influenced by British and French elements.

The traditional and unique accent of white Charleston speakers has long been noted in the South and has been attributed to its early settlement by French Huguenots and Sephardic Jews both of whom played influential roles in Charleston's early development and history. Charleston also has a high concentration of African-Americans locals who speak the Gullah language, a creole language that developed on the Sea Islands and in the Low Country.

While the city has traditionally been predominantly Caucasian and African-American, there is a growing population of Hispanic and Asian immigrants.

To get started with mobilizing yourself or your church for the Charleston-North Charleston Metropolitan mission field, initiatives and contact info follow ...

India Association of Greater Charleston - Exists to participate in cultural events to disseminate information about the rich culture of India; to serve as a resource and repository of information about India; to increase the understanding of Indian culture, art, and heritage among the community; and to provide a platform for people interested in India to come together in a social setting.