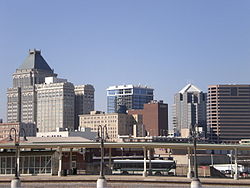 The Greensboro-High Point Metropolitan Statistical Area, commonly known as part of the Piedmont Triad, is located in the North-Central portion of North Carolina.

The Metro Area grew by 13.11% between 2000-2012, making it one of the faster growing communities in North Carolina. This area actually touches 6 counties within North Carolina, including Guilford, Forsyth, Davidson, Alamance, Randolph, and Rockingham.

The Greensboro economy and the surrounding Piedmont Triad area has traditionally been centered around textiles, tobacco, and furniture. High Point's ability as a "Niche City" to capture global centrality in the furniture merchandising market is said to signal a new era in what is possible for small cities. Area leaders are also working to attract new businesses in the nanotech, high-tech, aviation and transportation/logistics sectors.

Greensboro's central proximity in the state has made it a popular place for families and businesses, as well as becoming more of a logistical hub with FedEx having regional operations based in the city.

Politics and education attract a wide variety of people to the Greensboro-High Point Metro area from across the country and around the world. With this new growth in population and diversity comes new challenges for existing churches. Greensboro-High Point is geographically located between the largest North Carolinian cities of Charlotte and Raleigh-Durham. This makes it one of the most strategic places in the state for ministry and church planting among some of the most transient and diverse communities.

Greensboro-High Point has 22 different geographic pockets where the unevangelized population is 71% or greater. These geographic pockets represent an estimated unevangelized population of almost 100,000 households from all three major socio-economic groups. At the same time, Greensboro-High Point has at least 23 people groups from around the world that are unreached and in need of church planting efforts.

To get started with mobilizing yourself or your church for the Greensboro-High Point Metropolitan mission field, initiatives and contact info follow ...

New Arrivals Institute - The New Arrival School was as a place where families could come together to learn English and participate in employment readiness and cultural orientation programs.

North Carolina African Services Coalition - NCASC is one of several organizations responsible for resettling newly arriving refugee families from all over the world into the Greensboro area. This includes assisting families in acclimating to their new environment, and tapping into a well-developed network of resources to achieve success in the areas of employment, education, finances, health, and more.

The Center for New North Carolinians - The Center for New North Carolinians is committed to advancing the capacity of immigrants and refugees and building bridges between immigrant populations and existing communities throughout the state by providing: Community-based outreach and advocacy; Educational programming; Research and evaluation; Immigrant and refugee leadership development; and Educational opportunities for faculty and students.