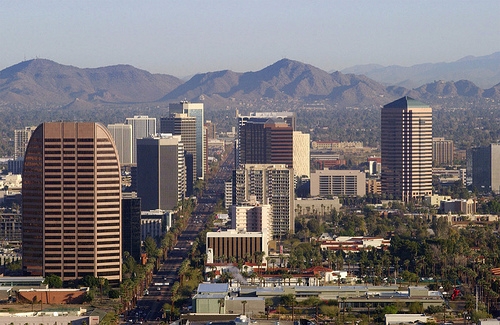 The Phoenix-Mesa-Scottsdale, AZ Metro Area, centered by the city of Phoenix, is often referred to as the Valley of the Sun, the Salt River Valley or Metro Phoenix.

The greater Phoenix metropolitan area is comprised of Maricopa and Pinal counties, and is 14,857 square miles in size. It is the largest metropolitan area in the state of Arizona, and one of the largest in all of the United States. It is currently estimated that approximately 67%of the population of the entire state of Arizona live in the Phoenix-Mesa-Scottsdale, AZ Metro Area.

Phoenix-Mesa-Scottsdale, AZ Metro Area is one of the fastest growing metro areas in the country. The population in 2000 was approximately 3.25 million, and has now reached almost 4.4 million which is a 35% increase of that time period. It is estimated that by 2030 the population will reach upwards of 7.1 million, which would represent a 118% total population increaseover that period of time. With a consistent rise in foreign-born population, the immigrant population in Phoenix could more than double in the next 20 years.

Phoenix is a largely diversified city with immigrants from all over the world gathering there. It has one of the countries largest foreign-born populations, and the number of immigrants that come per year is steadily increasing. The greater Phoenix area is one of the fastest growing large MSA's in the country, and the foreign-born population has grown at a similar pace. Phoenix would not be the city it is today without the influence from the immigrants that have settled there.

Phoenix Indian Center- A website with information on the Native American culture in and around Phoenix.

Refugees in Phoenix- A website that gives information on refugees in the greater Phoenix area, as well as offers opportunities to volunteer.